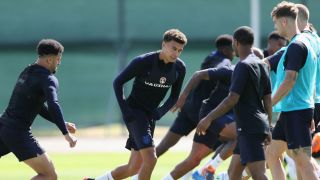 Dele Alli handed England a fitness boost on the eve of their World Cup Group G game against Panama by returning to training following a thigh injury.

The Tottenham midfielder sustained the problem during the Three Lions' opening 2-1 win over Tunisia in Volgograd.

Ruben Loftus-Cheek came on for Alli during the second half of that match and was widely thought to be in line for a maiden World Cup start against the Central Americans.

That may still come to pass, but the sight of Alli on the training field in Repino – albeit doing part of his warm-up away from the main group – represents a positive for boss Gareth Southgate as he looks to make it two wins out of two on Sunday.

Panama were beaten 3-0 by Belgium in their opening match at Russia 2018.