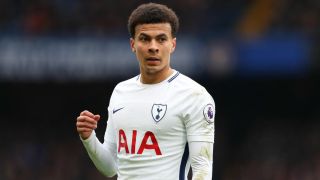 Dele Alli is excited about the changes happening at Tottenham in the near future but has refused to rule out a move away from the club amid reported interest from the likes of Real Madrid and Barcelona.

Since leaving MK Dons three years ago Alli has become a key figure for club and country, although last season he struggled to deliver consistent performances, his nine Premier League goals half the tally he managed in 2016-17.

LaLiga giants Barca and Madrid, as well as Manchester United, have all been linked with the midfielder ahead of his World Cup campaign with England.

And Alli has admitted he does not know what his future would hold if one of the big European names did come calling.

"I'd never say never to anything," he told ES Magazine. "You never know what is going to happen in football.

"I have still got a few years left on my contract. We have got a young team, a young manager, a new stadium, so it is a great place to be at the minute.

"All the players can see the way the club is heading. But you can't look into the future too much as it takes the pleasure out of now."

His immediate focus is on England's coming games in Russia and Alli is eager to perform at his first World Cup, the Three Lions kicking off against Tunisia on June 18.

"I am over the moon to be selected for the World Cup, it is what you dream of as a kid," he added.

"We have got a great manager and an ambitious young squad. I am confident we can have a successful tournament."

England's face Costa Rica on Thursday, in their final international friendly before the tournament in Russia.