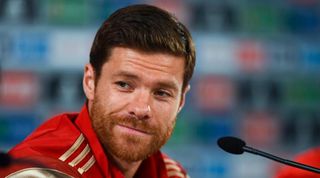 Kroos moved to the Santiago Bernabeu for an undisclosed fee in July, increasing Carlo Ancelotti's midfield options, and Alonso's exit was then confirmed on Friday, with the player signing a two-year contract at the Allianz Arena.

However, asked whether the added competition was a factor in his decision, Alonso said: "Not at all. He's a great player.

"I think we could have played a lot of minutes together.

"It goes beyond that. Real Madrid have everything planned. The midfield is well covered.

"I do not think my absence will be felt. Madrid have a great squad."

Alonso also revealed he had only become aware of Bayern's pursuit of him in the past fortnight.

"Bayern's interest is recent," he said. "Within the last two weeks.

"Having won La Decima I see there is a new cycle for everyone."

Bayern coach Pep Guardiola, who also signed Mehdi Benatia from Roma this week, hopes Alonso can provide cover for the loss of Javi Martinez with a knee injury.

"I was very happy with our squad but after Javi's injury we decided we need another couple of players," he said. "Benatia is a centre-back who's good in the air and good going forwards.

"Everyone knows Alonso. He's a great personality and has a lot of experience. Both are very good signings for the club.

"We need a player with Alonso's qualities and he's a very intelligent player in his position."