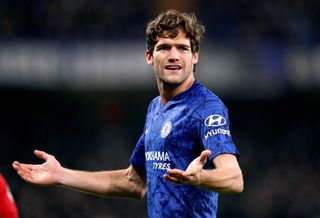 The Spain defender continues to nurse a hamstring complaint and will not be ready for Sunday’s Stamford Bridge encounter.

Fikayo Tomori is battling a bug to be ready to feature in defence, with young midfielder Billy Gilmour another to have been unwell.

Manager Frank Lampard took training on Friday but stepped down from press conferences duties to his own minor illness, but is expected to be ready to take charge at the weekend.

Yuri Ribeiro should return for Forest after shaking off a long-term knee issue.

Defender Ribeiro has been sidelined since November but is back in training and could hand a boost to boss Sabri Lamouchi.

Chema hobbled out of Forest’s 3-2 New Year’s Day win over Blackburn and now looks set to miss the Chelsea trip.

The full-back had been battling a hip complaint and exacerbated the problem against Blackburn.