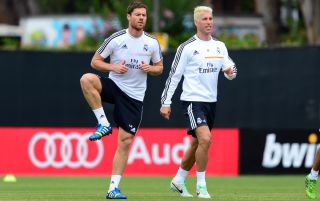 The Spain international has not featured in La Liga this season, having undergone surgery on both a groin problem and a fractured metatarsal in recent months.

While there were reports that Alonso could return to action sooner than expected, the 31-year-old was keen to play down talk of a return in the near future.

"Hopefully (I'll be back) soon, but I’m not going to put a date on it," he is quoted as saying by AS. "You can't trust this injury at all, it's vital to take it day by day.

"I'm close but there is still a little bit to do. I spend all my time talking to the doctors and we don't want to speed up my recovery and make things worse. We are working on it.

"It's a nasty injury and I wouldn't wish it on anyone. With some injuries you know that you'll be back after a certain amount of time, but [with this one] you just don't know, even though I feel good right now.

"Little by little I'm getting better and getting back on the pitch."

Real, third in La Liga, take on leaders Barcelona in the first Clasico of the season at Camp Nou on October 26.

However, Alonso preferred not to speculate on whether he would return in time for the clash.

"It's been a tough summer," he continued.

"I decided not to go to the Confederations Cup, and to have the operation instead. I think it was the logical thing to do and the best approach both for me and the team, because I wasn't going to be ok and to compete you need to be 100 per cent.

"Then, I was close to playing when I managed to break a bone in my foot. I had to stop and was using a walking frame, which meant the recovery [from the other injury] went backwards.

"I'm closer than ever now but I need to respect how my body is feeling and not put a time frame on it."