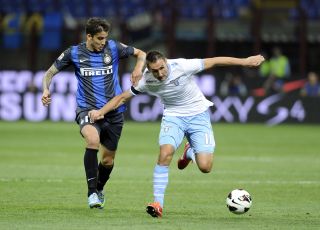 The 51-year-old made the switch to San Siro from last season's Serie A runners-up in May, but Inter's pre-season campaign was not as positive as he would have hoped.

However, despite defeats against the likes of Valencia, Chelsea and Real Madrid in the close-season, Mazzarri has the full support of his players - and Alvarez feels he is the right man to help them improve.

"The coach is good, he has clear ideas," the Argentina international told Sky Sport 24.

"This is crucial for us players because this way we understand exactly what we have to do.

"He really helps us a lot."

Inter open the new Serie A season at home to Genoa on Sunday as they seek to improve on their disappointing ninth-place finish last term.

The campaign - their worst since the 1993-94 season - resulted in the departure of former manager Andrea Stramaccioni, which paved the way for Mazzarri to take charge.