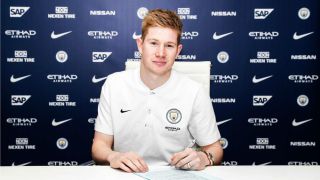 Kevin De Bruyne has insisted he never considered a move away from Manchester City, after signing a new five-year deal at the club.

The Belgium international has signed on at the Etihad Stadium until 2023 but was briefly linked with a move to Real Madrid at the end of last season.

De Bruyne has been one of the star performers in a stunning campaign for City, who are 12 points clear at the top of the Premier League and through to the Champions League last 16.

And the 26-year-old says he feels "at home" in Manchester.

"I am really happy to have signed this new deal," De Bruyne told CityTV.

"As I've said previously, my intention has always been to stay here at City, where I've felt at home from day one.

"Not only are we winning, we are playing great football. It's a pleasure to be a part of and I'm really excited about what we can achieve in the coming years.

"You hear a lot of people talking about other clubs, but at the moment I think we are one of the better clubs in the world.

"The way this whole club is working as a unit is unbelievable. I've never witnessed it in other clubs like that.

"I'm happy to build with this team."

De Bruyne, who has eight goals and 13 assists to his name in all competitions this season, believes he is playing the best football of his career.

"Everyone looks at different things. I think all around I've played my best season this year," he added.

"Some people look at statistics and say my year in Wolfsburg, the last one.

"But I think the way we are playing - personally and also with the team - is at such a high level this year, so I don't think the other years can compete."