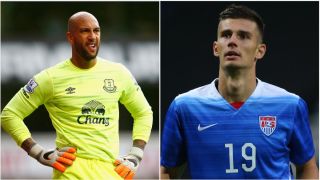 Almost 13 years ago, Tim Howard was a young and ambitious goalkeeper with aspirations for stardom and European glory. His talent suggested his future was bright, but even those who rated him highly had to be a little surprised when none other than Sir Alex Ferguson's Manchester United came calling to sign him up.

There is something serendipitous about these two Americans seeing their careers reach new milestones at around the same time. Both players were signed as teenagers by the New York Red Bulls (known as the MetroStars when they signed Howard). Both became fan favorites at young ages, and both quickly drew the interest of top clubs.

Howard's journey has seen him spend 13 admirable seasons in the Premier League, first with Manchester United and then with Everton, where he has held down the starting goalkeeper job for a decade. Reports surfaced on Tuesday breathing new life into earlier rumors about the Colorado Rapids wanting to bring him back to MLS. The rumors sounded more like wishful thinking for a desperate Rapids team than anything else at first, but fresh reports from NBC Sports and ESPNFC have helped offer some perspective into just how the club has closed in on Howard.

Simply put, money talks. The Rapids are reportedly ready to pay Howard between $2-3 million a season, an amount that would shatter any previous highs for goalkeeper pay in MLS. Colorado could also entice Howard with promises of a post-retirement role with the club, which would appeal to a player who has made it known he wants to work in team management when he hangs up the gloves.

Howard had been consistent in saying he planned on playing out his Everton contract through to 2018, and downplayed MLS talk, telling Goal USA last November that he had no plans to return. His attitude may have changed once the Rapids came in offering a salary range anywhere from two to three times more than the most modest projections expected for Howard upon his return to MLS.

Sources tell Goal USA that Howard had at least contemplated joining Atlanta United FC in 2017, when the expansion MLS team is set to begin play. The move would have partnered him with close friend and Atlanta United sporting director Carlos Bocanegra, and would have also left him playing relatively close to where his children live, in Memphis. As enticing as that arrangement might have been, it is very tough to imagine Atlanta United having come anywhere close to the salary range being reported as offered by Colorado, not for a goalkeeper who will be 38 years old when the 2017 MLS season kicks off.

So why would Colorado pay so much for Howard? Simply put, the Rapids are scrambling for impact players, and with their courtship of Alejandro Bedoya having fallen apart and attempted moves for Mexican standouts Carlos Vela and Alan Pulido looking less and less likely, Colorado desperately needs the kind of signing that will give fans some hope after consecutive bad seasons. Rapids technical director Paul Bravo has to be feeling the heat to transform a team that has finished each of the past two campaigns with records among the worst three in the league.

The Red Bulls' decision to sell Miazga might seem even more perplexing, but as Goal USA laid out last month, the reigning MLS Supporters' Shield winners don't have much of a choice. Miazga is a hot commodity entering the final year of his contract, and the Red Bulls must balance the prospect of losing him for nothing after the season with the option of selling him now and securing a transfer fee.

The Red Bulls don't want to sell Miazga and have been locked in a battle with the player's representatives for months, with sources telling Goal USA that attempts were made to have the Red Bulls sell Miazga to the same club in Cyprus that his agents have been linked with in the past. The Red Bulls balked at that idea, but now Miazga's representatives appear to have finally secured an offer from an unidentified English club. Sources told Goal USA last month that Miazga's agents were speaking to a London-based club about the young defender, with Chelsea and Tottenham the leading suspects.

Chelsea would make sense given the fact Kia Joorabchian has dealt closely with the club in the past, and more recently has been working on securing Alexandre Pato's move to the Blues. Ryan Nelsen, who is working as Miazga's agent, has connections with Tottenham and Queens Park Rangers, having played for both London clubs.

As much as a move to a big European club might make for good headlines, you have to wonder if the timing is right for Miazga, who is coming off his first year of signiicant playing time as a professional. If, for example, Chelsea is the team buying him, Miazga wouldn't be competing for playing time any time soon and would most likely need an immediate loan to continue developing. A loan back to the Red Bulls for the 2016 MLS season would be the most sensible option for Miazga and the Red Bulls, but may not be what his representatives have in mind.

Both players are making right moves

Miazga could take heart in Howard's experience when he made the move to Manchester United. Back in 2003, he wasn't expected to play much when he was first signed, but he wound up being the Red Devils' starting goalkeeper in his first season, earning a spot on the PFA Team of the Year.

Such a scenario is probably too much to ask for a 20-year-old central defender with one year as a pro starter under his belt, but if anything, Howard's experience could serve as a warning to not underestimate just how Miazga will do overseas.

As for Howard, having him back in MLS will be good for the league, and he still has enough left in the tank to be a difference maker on any team he joins. It would have been disappointing if he had never returned to play in the league where his career began. That being said, it does feel a bit like his European career is ending abruptly, assuming he does leave in the coming months. As much as that may seem to be the case, it is better to have Howard come back to MLS a year early than a year too late.

Though no deals have been completed for either Howard or Miazga just yet, Tuesday's reports do make it feel like we are experience a changing of the guard on both sides of the Atlantic, and only time will tell if these moves were the right ones to make.