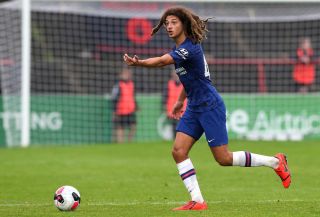 Chelsea teenager Ethan Ampadu believes a spell in the Bundesliga is the ideal move for his career after securing a one-year loan at RB Leipzig.

The 18-year-old, who can play either as a centre-back or as a defensive midfielder, featured just five times last season under former Blues boss Maurizio Sarri.

New Chelsea manager Frank Lampard revealed recently he tried to sign Ampadu on loan in January when he was in charge at Derby.

The move to RB Leipzig will be Ampadu’s first loan spell since his arrival at Stamford Bridge from Exeter two years ago.

Ampadu has made 12 appearances in his two years with Chelsea and in September 2018 he signed a new five-year contract.

Chelsea are banned from signing players during the next two transfer windows until the end of January 2020, which could have opened up an opportunity for Wales international Ampadu this season.

New head coach Lampard, though, feels the move to Germany will prove beneficial for all parties.

“I tried to sign Ethan on loan at Derby last year so I’m a big fan,” Lampard said on the Chelsea website.

“But with the minutes he played last year, in the interest of Ethan and of Chelsea, the idea he can play a lot of games somewhere could be good for him.

“I really wanted to work with Ethan this year. That’s a slight disappointment, but it’s to benefit of him.

“In midfield and defence we have a lot of quality, so each player is a case by case.”

Ampadu believes the switch will prove the “perfect step”.

“I’m delighted to be at RB Leipzig and can’t wait to start the season with my new team. I want to get to know the lads and integrate into the team as quickly as possible,” he said on Leipzig’s website.

“I have followed the club in recent years and have seen how well young players have developed here and how much potential this club has, so it’s the perfect step for me.”

N’Golo Kante has travelled back to the UK to continue his rehabilitation for an injury connected to the knee problem he sustained at the end of last season.#CFCinJapanpic.twitter.com/w4MdkhAANU— Chelsea FC (@ChelseaFC) July 21, 2019

Chelsea lost 1-0 to J League side Kawasaki Frontale in their pre-season friendly in Yokohama.

Lampard will now prepare his squad for the Rakuten Cup clash against Barcelona in Saitama on Tuesday.

Chelsea midfielder N’Golo Kante will not feature as he has returned to England to continue rehabilitation for an injury connected to a knee problem sustained at the end of last season.