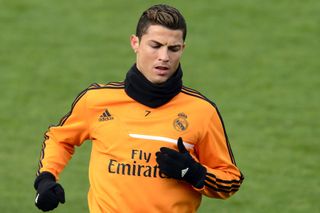 The Real star scored 69 goals in 59 matches in 2013, claiming the prestigious honour ahead of Barcelona's Lionel Messi and Bayern Munich's Franck Ribery.

Ancelotti said Ronaldo's ability never took him by surprise, but still wants more out of the 28-year-old.

"I was never surprised by Cristiano Ronaldo's qualities or goalscoring skills," the Italian said.

"If I was surprised, it would have been because of his professionalism both on and off the pitch - I didn't know that about him. He's a good example for the young players.

"He always makes a good impression on the pitch, he is a fair player and he doesn't complain to the referee. For football, the image he creates is great.

"Football needs those players, like Messi, Ribery, Thiago Silva or (Andrea) Pirlo. Football needs these kind of players to improve it' image. The greater they are, the better football's image will be.

"We can always ask for more from a Ballon d'Or winner, it won't be easy in his case as he already scored 69 goals in a calendar year, but I do have the courage to ask him more."

Ancelotti told his team to ignore the 2-0 aggregate advantage they hold over Osasuna heading into the second leg away from home in the Copa del Rey.

"The team is focused and motivated. We all know how difficult it is to play against Osasuna in Pamplona," he said.

"We have always had tough times when facing them. It'll be an intense game. They will try to do their best to go through.

"We had better be focused and play our game. We shouldn't be thinking about our advantage. We have to play this game and try to win it by scoring as soon as possible."