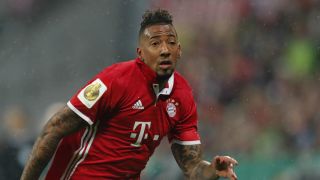 Carlo Ancelotti insists that Jerome Boateng and Renato Sanches will be staying at Bayern Munich next season despite reports the duo could seek pastures new.

Boateng has endured several fitness problems this season and made just 11 Bundesliga appearances as a result.

Reports in the German media claim Boateng has sought a meeting with Bayern to discuss his future, with Premier League duo Tottenham and Arsenal having been linked with a move for his services.

But Ancelotti expects Boateng to still be a Bayern player next term.

"Boateng has had a difficult season, he was injured a lot," he told a news conference ahead of Saturday's Bundesliga contest with RB Leipzig.

"He has a good standing in the team. He stays with us.

"I talked to him, I talk a lot with my players. I have no problems."

Sanches arrived at Allianz Arena from Benfica as one of the most sought after prospects in European football and shined for Portugal en route to winning Euro 2016.

However, Bayern fans have yet to see the best of Sanches, who has made just six league starts this term.

Manchester United were tracking Sanches before his move to Bayern and reports in England claim the Red Devils are considering a fresh attempt to sign the midfielder.

But Ancelotti, while admitting Bayern expect more from the 19-year-old, has no plans to sell.

"Renato Sanches has his first season here. For such young players it is often difficult to get used to," he added.

"But of course we expect more from him. We must be patient with him. He will have more chances to play next season. He will stay here."