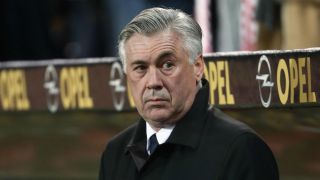 Bayern Munich head coach Carlo Ancelotti has little desire for a Real Madrid reunion in the last 16 of the Champions League.

The Bundesliga champions beat Atletico Madrid 1-0 at the Allianz Arena on Tuesday, but knew ahead of that match that they could not usurp Diego Simeone's men at the top of Group D.

Bayern now, theoretically, face a tougher last-16 draw against one of the eight group-stage winners, raising the possibility of Ancelotti coming up against former club Madrid, who he led to Champions League glory in 2014, if they top Group F.

However, Ancelotti is keen not to visit the Santiago Bernabeu any time soon.

Speaking to beIN Sports, he said: "Of course I don't want to face Real Madrid, but we have to wait to see.

"Whether you're first or second there are many strong teams who have finished as runners-up.

"No matter what it will be difficult."

Real must be Borussia Dortmund on Wednesday in order to finish top of their group.