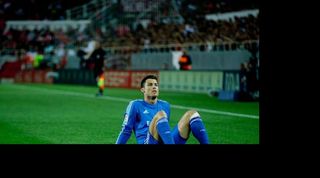 Ancelotti has seen his side win their last two league games 4-0 without Ronaldo, though the Italian could also be shorn of his Copa final hero Gareth Bale, reportedly struggling with flu.

However, ahead of Wednesday's tie at the Bernabeu, Ancelotti insisted he will not rush Ronaldo back into his side - and has eyed his potential impact in next week's second leg.

"Cristiano has trained well in the last few days. He will have more tests then we'll make a decision," he said.

"If everyone is certain he can play without any problem then of course he will play. I am confident he will play, but we're going to make the decision (on Wednesday).

"If there's any risk of a relapse he won't play. We have to remember that this tie is not going to be decided (Wednesday).

"We may be able to gain an advantage from the home leg, but the really decisive game is next Tuesday in Munich."