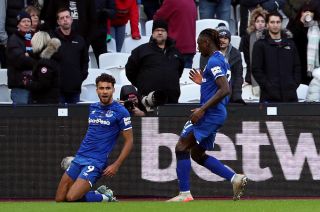 Everton manager Carlo Ancelotti believes Dominic Calvert-Lewin would be a worthy inclusion in England’s next squad, tipping the 22-year-old to become one of the country’s top forwards.

Calvert-Lewin awaits a senior call-up but has played 17 times for England Under-21s, while he is enjoying his best season to date after taking his tally to 11 goals with the leveller in the 1-1 weekend draw at West Ham.

With Tottenham striker Harry Kane expected to miss friendlies against Italy and Denmark at the back end of March with a hamstring injury, England boss Gareth Southgate may be forced to look at fresh options.

And asked whether Calvert-Lewin is ready to make his senior bow for the national side, Ancelotti responded: “Of course he can play. He showed a lot of quality in the last game, he can play for England, no doubt about this.

“England has fantastic strikers, he has to fight but he has the quality and possibility to be a great striker in England and for England.

“Dominic is doing really well, he has to keep going, he is showing good qualities in this moment, his feeling in this period is really good.”

However, Ancelotti pointed out Calvert-Lewin is already on England’s radar, adding: “I don’t have to tell Southgate to look at Dominic because he already did this. Southgate has his own right to decide.”

Calvert-Lewin is poised to lead the line once more when Newcastle visit Goodison Park on Tuesday evening, with the knee injury that led to Richarlison missing out at the London Stadium set to sideline the Brazilian once more.

Richarlison returned to training on Monday but reported pain so he will not be risked. Neither will Alex Iwobi, who has missed Everton’s last six games after suffering a thigh complaint against Arsenal before Christmas.

Fellow midfielder Gylfi Sigurdsson will also be on the sidelines because of a groin injury while Ancelotti will make a late decision on Michael Keane, who was back in training on Monday following a neck problem that meant he missed the trip to West Ham.

Newcastle have a lengthy casualty list themselves, something Ancelotti attributed to a busy schedule which has not allowed players sufficient time to recover from games.

With Everton knocked out of the FA Cup, they will not be in action this weekend while next month’s winter break offers another chance for players to recharge their batteries.

The Italian said: “This is the period where we’ve had a lot of games, the players are not recovering properly. To play takes more risk in this period.

“We are having a busy time, a lot of games and after this game we have a period where we can train properly, have a good rest. On the injury aspect it will be better.

“The fact that there will be a winter break in February can help all the teams to be better at the end of the season. This is for sure.”

Ancelotti revealed there will be no trip to warmer climes during the winter break, adding: “The plan is to give some rest to the players, maybe four or five days, and then start training here.

“I want to stay here in Finch Farm because we have a fantastic training ground and so we don’t need to move around the world. It’s better to stay here.”