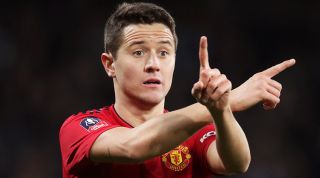 Manchester United are confident that Ander Herrera will sign a new deal at Old Trafford, according to the Metro.

The former Athletic Club man is out of contract this summer and has been linked with PSG and Arsenal.

Herrera has been free to speak to foreign clubs since January, but Ole Gunnar Solskjaer has decided that he wants to retain the midfielder’s services.

And although the Spaniard has not yet put pen to paper on fresh terms, United believes it is only a matter of time before he commits his future to the club.

Herrera joined United from Athletic for £24m in summer 2014, but a summer exit looked likely when he lost his place in the starting XI under Jose Mourinho earlier this season.

Solskjaer has since reintegrated the 29-year-old into the team, though, and United now expect him to still be at the club for the 2019/20 campaign.

The Red Devils meet Watford in the Premier League on Saturday as they attempt to climb into the top four.