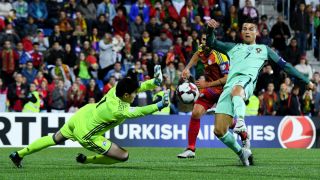 Cristiano Ronaldo came off the bench to keep Portugal's hopes of automatic World Cup qualification alive, breaking the deadlock in a hard-fought 2-0 win away to Andorra in Group B.

Ronaldo, one booking away from a suspension, was named among the substitutes on Saturday by coach Fernando Santos ahead of the crunch clash against Switzerland on Tuesday.

But, after a goalless first half, Santos was forced to turn to his star man and risk Ronaldo getting a yellow card that would see him missing that crucial concluding fixture.

The Real Madrid superstar thrived on the pressure by scoring his 15th goal of the qualifying campaign to draw level with Poland's prolific Robert Lewandowski 18 minutes after his introduction, poking in a Joao Mario cross from close range.

Ricardo Quaresma and Bernardo Silva were wasteful but an Andorra equaliser was never likely and Andre Silva scrambled in a late second to guarantee the points for his side, while Ronaldo successfully avoided a booking.

With Switzerland maintaining their perfect record by winning 5-2 at home to Hungary, Portugal - who have confirmed a play-off place at least - will have to beat the Group B leaders in Lisbon to snatch top spot.

Ronaldo scored twice in the first four minutes in the return game a year ago, but without their talisman the Euro 2016 winners toiled to break down Andorra's stubborn resistance.

Nelson Semedo's viciously inswinging right-wing cross flicked off Ildefonso Lima's head and Quaresma, arriving at the back post, headed wide with the goal at his mercy.

Quaresma almost rapidly made amends but Josep Gomes punched his cross-shot away with his first meaningful involvement, then Andre Silva lashed a volley over the crossbar after a defensive mix-up.

Portugal finally made Gomes work after 39 minutes, the Andorra goalkeeper diving to his left to keep out a swerving Pepe strike, but the deadlock remained unbroken at the interval.

Santos had seen enough and introduced Ronaldo, replacing the ineffective Gelson Martins, but a Bernardo Silva mishit from a fine position summed up Portugal's wastefulness.

But it was inevitably Ronaldo - who had scored 96 goals in his 100 competitive games since the start of 2016 for club and country - who made the difference for the visitors.

An enticing Joao Mario cross reached Ronaldo at the back post via a deflection off Lima, ensuring he was onside despite Andorra's protests, and he was never going to miss from six yards out.

The second goal eventually came with five minutes to go, Andre Silva bundling in from close range after a left-wing Ronaldo cross was headed into his path by Danilo Pereira, with a straight shoot-out with Switzerland for top spot in Group B now set for Tuesday.