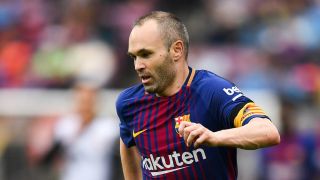 Lionel Messi and Cristiano Ronaldo have rightly dominated the headlines for the past decade, leaving Andres Iniesta's sustained brilliance to go under the radar somewhat.

However, there is no question that the Spanish magician is the footballers' footballer.

Much like Paul Scholes before him, his technique, vision and ability to dictate the pace of a game has been consistently recognised by some of the most high-profile names in the sport.

Following the news that the 33-year-old will leave Barcelona at the end of the season, with China his likely next destination to see out the final years of his career, we look at some of the glowing tributes paid to the imperious Iniesta during his time at the very top of the game.

"Iniesta doesn't dye his hair, he doesn't wear earrings and he hasn't got any tattoos. Maybe that makes him unattractive to the media, but he is the best."

"Andres and I are similar in that we both use our bodies a lot, to avoid opponents. But he has something that always amazes me. There's always a moment when you think you're going to catch him, when you think you're going to get the ball off him, but you can't. He's not especially quick, but he has that ability to always get away from you, which comes from his technique."

"When he has the ball, it's like everything else stops – like the camera is going in slow motion."

"When I see him play these days, he reminds me of Xavi. He was always a top-quality player. He started very young with us, and it's crazy to see how he has gone on to make so much history."

"Iniesta is the boyfriend that every mother wants her daughter to have. The figures over his career tell you all you need to know. He is a magical player. There are few players in the world that can compare to him."

"Iniesta is easily Spain's most complete player. He has everything. Playing alongside him is very easy."

"The press often ask me whether Messi or Ronaldo is the best, but for me something is very clear: Andres Iniesta is the number one. He is able to do even more difficult things on the pitch. He is magic with the ball and so influential."

"He is the complete footballer. He can attack and defend, he creates and scores."

"He's creative, he runs with the ball, he's got a brilliant final pass and with each passing year he's become more of a goalscorer as well as a provider. He's a source of immense confidence for us. During matches you can see him taking on more and more responsibility and in attack he's the team's reference point."

"Iniesta is a great player. If people compare me to him, that makes me proud. He is one of the best midfielders in the history of football. I like playing against him. I admire him as a player and an athlete."