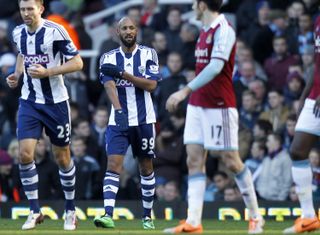 West Brom striker Anelka is facing a minimum five-match ban after the FA opted to act on the salute he performed when scoring in a 3-3 draw with West Ham last month.

The Frenchman has repeatedly denied his celebration held anti-Semitic connotations and he reinforced that point again in a message on his official Facebook page on Wednesday, which appeared to suggest that he is ready to contest the FA's decision.

Referring to a video that he had earlier posted on Twitter, in which prominent Jewish leader Roger Cukierman - president of the Representative Council of the Jewish Institutions of France and vice-president of the World Jewish Congress - argued that Anelka's use of the 'quenelle' was not worthy of a hefty punishment, the 34-year-old requested for the charge against him to be dropped.

"I ask the English Federation to kindly remove the charges alleged against me. And I repeat, I am not anti-Semitic or racist," said Anelka.

Elaborating on his reasons for arguing against the FA charge, Anelka added: "The English Football Association has hired an expert to decide the meaning of my quenelle.

"The latter concluded that my gesture was an anti-Semitic connotation, which led to my indictment by the FA.

"What better expert (than) Mr Cukierman, president of CRIF (Representative Council of Jewish Institutions in France), who explains very clearly that my 'quenelle' could not be regarded as anti-semitic!

"He also explained precisely and when the gesture could have such a connotation."

In the video posted earlier on Anelka's Twitter, Cukierman had said: "It (the FA action) looks a bit severe to me.

"It (the 'quenelle' gesture) would be reprehensible only in the case where the gesture was made in front of a synagogue or a Holocaust memorial.

"When it is made in a place that has no Jewish specificity, it seems to me that it is a gesture of rebellion, a little anarchist, against the establishment.

"And that, it seems to me, doesn't deserve a severe sanction."

Anelka was charged on Tuesday and has until 1800 GMT on Thursday to officially respond to the FA.