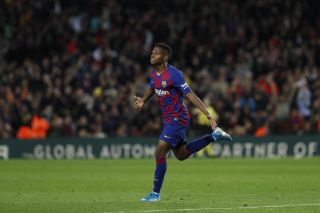 Ansu Fati’s quick-fire double helped Barcelona to a 2-1 victory against Levante as the reigning champions moved back to within three points of LaLiga leaders Real Madrid.

Lionel Messi had missed a couple of good opportunities, by his standards, to open the scoring before he laid on two goals in as many minutes for 17-year-old Fati around the half-hour mark.

Levante improved in the second half and got the goal they had been threatening in added time courtesy of Ruben Rochina’s sweet left-footed strike.

The win saw Barcelona bounce back from their league defeat at Valencia last week while Levante’s miserable record continued at the Nou Camp, where they have been beaten on every visit in the club’s history.

Quique Setien had suggested that he needs consistency in his team to get performances back on track and he kept faith with 10 of the 11 players that started the 5-0 Copa del Rey win against Leganes in midweek, with the only change coming in midfield where Ivan Rakitic replaced the injured Arturo Vidal.

Levante produced a brilliant performance to beat Barcelona 3-1 in the reverse fixture in November, stunning the Catalans, but their form since has been indifferent and has seen them slip down the table.

The first half was one-way traffic as Messi poked an early effort wide before bringing a save from Fernandez Aitor after surging towards goal from the right-hand side.

Antoine Griezmann then lifted a shot over the goalkeeper but wide of the post before Messi failed to get enough power on his shot and saw his effort beaten away by Fernandez.

The home side’s pressure told after 30 minutes when a superb defence-splitting pass by Messi sent Fati through on goal. The teenager brushed off the challenge of Jorge Miramon before stroking the ball into the net.

Two minutes later it was 2-0. Messi was the architect once more with a probing run into the box and lay-off for Fati to score again with a strike from a tight angle, with the forward becoming the youngest player to score two goals in one LaLiga game.

Nelson Semedo crashed an effort off the crossbar shortly afterwards as Levante were put under siege, before Griezmann somehow managed to stab the ball wide from close range in first-half stoppage time.

It looked like Barcelona would pick up where they left off when the second half began, with Griezmann and Fati threatening and Sergio Postigo having to clear an effort from Messi off his own goal line.

However, Levante made more of a game of it after the break and Marc-Andre Ter Stegen was called into action for the first time after 53 minutes to deny Marti Roger in a one-on-one. Rochina fired the rebound over the crossbar.

Ter Stegen was busy again two minutes later as he had to quickly get down to his left to smother a Gonzalo Melero strike.

At the other end, Messi shot straight at Fernandez before Ter Stegen produced a fine one-handed save to tip substitute Fortes Hernani’s shot over.

Fati almost completed his hat-trick in spectacular fashion midway through the second half but his overhead kick from Frenkie De Jong’s cross went narrowly wide.

Fernandez thwarted Messi again after he danced his way through the Levante defence, only to see his strike pushed away.

Marti should have reduced Levante’s deficit five minutes from time when he capitalised on a defensive mistake by the hosts but with just Ter Stegen to beat he blazed the ball over the crossbar.

It looked like that might be the last chance of the game but the visitors got the goal their second-half showing arguably deserved at the death through Rochina’s strike from the edge of the box.