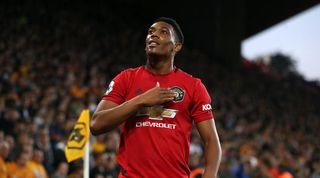 Ole Gunnar Solskjaer has hailed Anthony Martial as the French forward prepares to make his return to Manchester United’s starting XI in the Premier League.

And having hinted that he could pair Martial with Marcus Rashford in attack when United travel to Norwich on Sunday, Solskjaer believes the wider public do not realise how good the France international is.

“Now Anthony is back, I am quite happy with the options I have in attack,” he told the Daily Mirror.

“I’ve heard what some people have said about us being short of a genuine No.9, but Anthony has absolutely ­everything in his locker to take that role.

“He can be a target man, he’s quick, he’s technical – and one of the reasons he wanted to stay here was because I told him I saw him as a central striker. I don’t think people ­outside the club realise how good this lad is.

“But the players in the dressing room know. When we are talking about how we are going to score goals, they say, ‘We will just give the ball to Anthony.’

“He has the confidence of his team-mates and his manager ­because we see him every day in training. What I’ve now got to do is set the team up to get the best out of him, but I think he will improve by just staying fit and playing more games.

“We have missed him for the last eight weeks. We hoped to have him back earlier and he was so desperate to play that he really pushed his recovery and ended up having a small recurrence.”

United could climb into the top half of the Premier League table with victory at Carrow Road on Sunday.