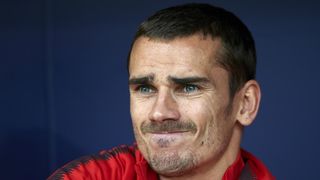 Antoine Griezmann has finally announced he is staying at Atletico Madrid, ending months of speculation he is set to join Barcelona.

Few players summon the courage to reject a move to Camp Nou, but Griezmann appears convinced his future remains at Atletico.

"I have decided to stay, I feel there are things to do with Atletico," Griezmann said in a faintly ludicrous documentary televised on Thursday.

Griezmann will now be free to focus on France's bid to win the World Cup, but could he come to regret his decision? We have taken a look at the pros and cons of Griezmann's announcement.

The impending arrival of Thomas Lemar from Monaco is a clear sign that Atletico mean business - they want to build a team around Griezmann that can compete for honours domestically, as well as in Europe. Lemar's signing adds more pace and flair to Atletico's attack and the combination between the two France internationals could be mouth-watering. With Lucas Hernandez increasingly important at the back, there is also a growing core of French talent at the Wanda Metropolitano.

Pro 2: Playing in his best position

Griezmann's versatility is one of his greatest assets, but playing as a number 10 is his best position - and one he would surely not get to play at Barcelona. At Atleti, the attack is centred around Griezmann's gifts, whereas he would have to play second fiddle to Lionel Messi at Camp Nou. Indeed, with Ousmane Dembele, Luis Suarez and Philippe Coutinho competing for places, Griezmann might not even be an automatic starter for Ernesto Valverde. And, even if he did play, he might be stuck out on the wing rather than being given a free role in the middle.

That Atleti have been able to keep their prized coach Diego Simeone, as well as attracting the likes of Fernando Torres and Diego Costa back, shows there is something special about the club. Atleti have been able to punch above their weight under Simeone, winning LaLiga and the Europa League and reaching two Champions League finals. At Barca, winning is merely expected, whereas at Atletico those successes are truly cherished.

Real Madrid have won three Champions League titles in a row, while Barcelona claimed a domestic double in Valverde's first season at Camp Nou. Those clubs have been making history at the same time Simeone builds an empire at Atletico. Despite having Griezmann, and Costa returning in January, Los Rojiblancos finished 14 points behind Barca last season, with the Catalans only beaten once in the league.

Con 2: No guarantees of success with Atleti

With Madrid dominant in the Champions League and Valverde's Barca impressive in LaLiga last term, it is increasingly difficult for Atleti to win the biggest prizes. Griezmann's double in the final earned Europa League glory, but Simeone will see that as relative failure - even having been drawn in a strong pool, they would have expected to pip either Chelsea or Roma to qualification from their Champions League group. Griezmann could conceivably stay at Atleti for the rest of his career and win none of the major honours he desires.

Con 3: Doesn't get to play with Messi

Staying at Atletico might mean Griezmann does not have to compete for a place with Messi, but he does not have the chance to play with the Argentina international either. Messi's reputation as one of the sport's all-time greats is secured regardless of whether he can lead his country to World Cup glory in Russia. But Messi is 30. His decline will surely come soon and Griezmann is missing out on the chance to form an exciting partnership with the superstar.