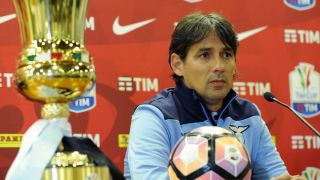 Lazio head coach Simone Inzaghi is happy for his team to be playing the role of underdogs in Wednesday's Coppa Italia final against Juventus.

Treble-chasing Juve aim to end the week with two trophies for safe keeping, knowing victory over Crotone on Sunday will seal a sixth consecutive Scudetto.

But Lazio's city rivals Roma were the latest side to shine a light on some late-season vulnerability in the ranks of the Champions League finalists, as they claimed a 3-1 win at the weekend to prolong the Serie A title race, and Inzaghi hopes his men are ready to pounce if the chance presents itself.

"This is a huge game for us," he told a pre-match news conference before contesting the final on home turf at the Stadio Olimpico. "We have worked incredibly hard to get here and we fully deserve our place in the final.

"On the way, we produced brilliant performances against Genoa, then away at Inter and finally in the derby against Roma. We're here to win.

"Obviously on paper you would have to make Juventus firm favourites. As we know, with the right approach, anything can happen in a one-off game like this.

"It will take a perfect 90 or even 120 minutes for us to lift the trophy but we have prepared as best we can."

Lazio lost both Serie A games against Juve this season, with Sami Khedira scoring the only goal in the capital clash before Paulo Dybala – an injury doubt for the final – and Gonzalo Higuain struck early on in the January return.

"We played well against them here at the start of the season and our first and only dip in concentration to allow Sami Khedira to score cost us the game," Inzaghi added

"We deserved to lose at Juventus Stadium in the new year so this time around we want to deliver a performance worthy of this football club.

"Teams don't win six Scudetto titles in a row by accident and we know how good Juventus are.

"As an Italian, I'm proud to see Juve in the Champions League final. Both sides are ready to give their all."