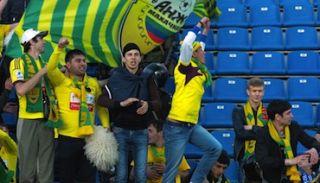 "The UEFA emergency panel and decided that due to the security situation in Dagestan and the North Caucasus, no UEFA competition match is allowed to be played in this region during the 2013/14 season," UEFA said in a statement.

"Consequently, Anzhi Makhachkala have been requested to propose an alternative venue for their home matches in the 2013/14 UEFA Europa League."

"The UEFA emergency panel came to this decision after having carefully examined and evaluated the current security situation in the North Caucasus and notably in Dagestan, and taking into account the whole range of circumstances as well as the warnings issued by various governments.

"This decision remains in force for subsequent seasons until further notice."

Anzhi have spent a lot of money on the likes of Cameroon striker Samuel Eto'o and Dutch coach Guus Hiddink, and signed Brazilian midfielder Willian for a 35 million euros.

They finished third in the Russian Premier League last season, missing out on a place in the Champions League.