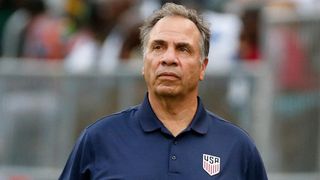 Bruce Arena said he would like to see a European team experience the challenges of CONCACAF World Cup qualifying as the United States prepare to face Trinidad and Tobago.

USA are poised to qualify for Russia 2018 heading into Tuesday's clash with Trinidad and Tobago in Couva, but their preparations have been hampered by poor pitch conditions.

Part of Ato Boldon Stadium – the venue for USA's final 'Hexagonal' fixture – was submerged in water as the Americans struggled to complete much of their training session on Monday.

And USA head coach Arena – whose side occupy the third and final automatic qualifying spot ahead of Panama and Honduras as they bid to reach an eighth consecutive World Cup – invited Europeans to play in the testing conditions in North America.

"I would love to see one of these hotshot teams from Europe come here and play in our CONCACAF qualifying and really get a taste of this and see what that's about," Arena told reporters on Monday.

"This is very challenging, it's like survival of the fittest. They could do one of those TV shows on this. Who will survive in the end, that's basically what this is."

"Any time a team is in challenging games, the games mean something, it prepares you. It's different," Arena continued. "But if you look at some of groups in Europe, I'm not sure there's a great argument for saying that Germany's group, they're tremendously prepared to play in a World Cup because of their group play. So everything is a little bit different.

Arena, who is hopeful Borussia Dortmund sensation Christian Pulisic will be fit for the match, added: "Tomorrow [Tuesday] is going to be challenging, there's a possibility it won't look like a real good game with the conditions and all. Hopefully there's not too much rain between now and kick-off, the field conditions improve, and both teams can play.

"But it could be other way where conditions are difficult, and it's a real slugfest. We'll have to wait and see, but tomorrow's game will look a heck of a lot different than the game we played [against Panama]."