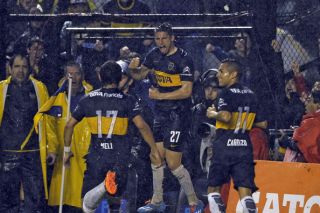 Calleri was thrown on with 23 minutes left in Mendoza with Boca trailing hosts Godoy Cruz 2-1 in the Argentine Primera Division and the 21-year-old forward set up a goal and scored another to give the visitors a 3-2 victory.

The win saw Boca rise to fifth in the standings on 20 points, although they still trail River by eight, after the leaders cruised past Belgrano 3-0.

River are the only unbeaten team left in the Primera Division after 12 rounds this season and they had little trouble against Belgrano on Sunday with Teofilo Gutierrez scoring a second-half brace.

The goals took Gutierrez (10) clear of Independiente's Federico Mancuello and Silvio Romero (both eight) in the golden boot standings, while Gustavo Bou of Racing Club joined the latter pair with a goal in his club's 2-0 win over Velez Sarsfield.

At Godoy Cruz's Estadio Malvinas Argentinas, Boca took an early lead in the ninth minute thanks to  Fernando Gago's strike but trailed just after half-time as Rolando Garcia and Jaime Ayovi scored either side of the break.

But in the 74th minute, Boca dragged themselves back into the contest with Juan Manuel Martinez playing a one-two with Calleri, who returned the ball with a back-heel before his team-mate chipped Godoy Cruz's goalkeeper.

Calleri then scored the winner with eight minutes left, showing persistence as his first shot was saved, poking the rebound into the net.

In Monday's match, Tigre drew 1-1 with Arsenal to complete the round, which began in less than impressive circumstances, with Olimpo and Atletico Rafaela respectively holding Gimnasia La Plata and Quilmes to scoreless stalemates on Friday.

Lanus stayed four points behind leaders River with a 2-1 win at Defensa y Justicia, while Independiente trumped San Lorenzo by the same scoreline.

In other results, Rosario Central ended a three-game losing streak by overcoming Newell's Old Boys 2-0 and Banfield drew 1-1 with Estudiantes.