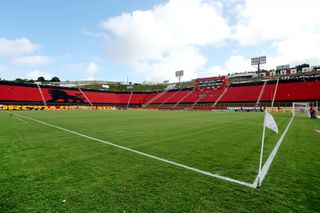 Luciano Lollo and Facundo Castillon were on target as the 10 men of Racing Club upstaged Copa Libertadores champions San Lorenzo 2-0 on matchday two on Sunday.

It was a similar story for Velez Sarsfield, who accounted for Arsenal 2-1 courtesy of Lucas Pratto and Ivan Marcone's own goal.

Racing Club and Velez Sarsfield are the only two teams to have won their opening two games and sit two points clear atop the table in Argentina.

San Lorenzo were crowned champions of South America last week after they defeated Paraguayan outfit Nacional to win the Copa Libertadores for the first time.

But San Lorenzo, who had their opening game rescheduled due to cup commitments, were given a wake-up call as Racing Club emerged triumphant at the Estadio Presidente Juan Domingo Peron.

Just as the half was set to end all-square, defender Lollo - a new recruit from rivals Belgrano - popped up to open the scoring in the 45th minute, rising highest to head the ball beyond goalkeeper Sebastian Torrico.

The home side were reduced to 10 men in the 80th minute after striker Gabriel Hauche was shown a straight red card but despite their numerical disadvantage, Racing Club sealed the points in the second minute of additional time thanks to substitute Castillon, who turned his defender and lofted the ball over Torrico.

At the Estadio Jose Amalfitani, Velez Sarsfield wrapped up proceedings inside an hour against Arsenal.

Pratto got the ball rolling in the sixth minute after tucking away a rebound from close range.

The home side went two goals ahead 11 minutes into the second half thanks to Arsenal defender Marcone, who bundled the ball into his own net.

Arsenal striker Emilio Zelaya did poke home a goal in injury time but it was nothing more than a consolation.

Boca Juniors lost their opening match but an unmarked Gigliotti directed his header past Juan Olave in the third minute of added time to give the 30-time champions their first win of the season.

In other results, an 84th-minute own goal from Gaspar Servio handed Defensa y Justicia a 3-2 win over Banfield.

Estudiantes were 1-0 winners at home to Independiente, while Atletico Rafaela prevailed 2-1 against Lanus.