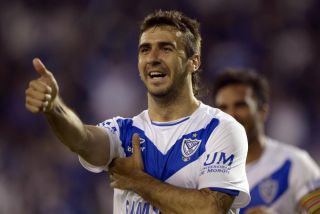 In-form attacker Lucas Pratto was on target again as Velez made it four wins from four, edging Lanus 1-0 at the Estadio Jose Amalfitani on Thursday.

Pratto, who netted a brace against Independiente on Saturday, scored his fourth goal in three games with a strike seven minutes from time in Buenos Aires.

Velez are two points clear of River Plate at the league summit after four matchdays.

Sanchez got the ball rolling in the 34th minute, winning possession inside the halfway line and initiating an attacking move before heading home a Leonardo Pisculichi cross.

The Uruguayan midfielder was at it again two minutes shy of the half-time break, using his head for a second time to convert a rebound.

Colombian forward Teofilo Gutierrez sealed the points with 13 minutes remaining, directing a header into the top corner after Defensa's defence failed to cope with a ball across the six-yard box.

Newell's Old Boys - fourth in the standings - almost squandered a three-goal lead but survived to win 3-2 at Atletico Rafaela on Wednesday.

But Atletico Rafaela insured a nervy finish thanks to late goals from Joel Sacks and Sergio Vittor.

Fifth-placed Godoy Cruz got the better of rivals Rosario Central on Wednesday thanks to Ruben Ramirez's 69th-minute goal.

As for Estudiantes, they heaped the pressure on Boca Juniors after triumphing 3-1 on Wednesday.

Estudiantes eased past struggling Boca, who are fourth from bottom, courtesy of Diego Vera's first-half brace and Joaquin Correa's opener.

Copa Libertadores champions San Lorenzo claimed their first points of the season, climbing off the foot of the table with a 3-0 win at Quilmes on Thursday.

In other results, Sebastian Penco and Federico Mancuello both struck in the final two minutes as Independiente upstaged 10-man Olimpo 2-1 on Tuesday.

Second-bottom Belgrano and Gimnasia La Plata were also in action on Tuesday, playing out a goalless draw.