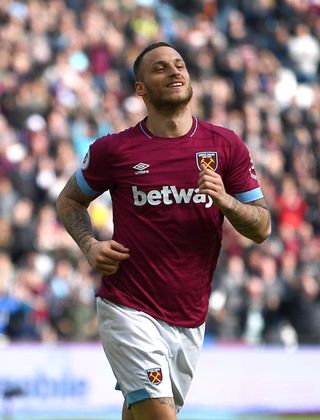 Marko Arnautovic revelled in a “perfect” send-off after inspiring West Ham to a 3-0 win over Southampton in their final home game of the season.

Arnautovic scored twice, his first goals since attempting to engineer a January move to China, before Ryan Fredericks added the third for Manuel Pellegrini’s men.

“It was nice to finish at home like this,” said the Austrian forward. “We trained hard the whole week and the manager kept saying to us that we needed to win this game.

“We knew the fans wanted to see that and we played a great game. We won 3-0, we’re very happy and I think the fans are also.

“We played very well defensively, in midfield and attack.  We created a lot of chances and 3-0 is nice, but it’s not the end – there’s still one match more to go.”

Arnautovic could have had a hat-trick but fired a late chance agonisingly wide of the far post.

“I don’t remember when I last scored a hat-trick, so when I got two goals I wanted a third as well,” he added.

Southampton arrived at the London Stadium having secured their survival a week earlier, and their efforts over the last few months seemed to have taken their toll.

“It was a disappointing day for us overall, especially out of possession,” Saints midfielder Stuart Armstrong told the club website.

“We struggled to get close to them, put pressure on them which we’re normally quite good at as a team.

“With the ball, we had some good moments and some good spells. On another day, perhaps a chance goes in and it changes the game. I think in the end not taking our chances and not dominating the game cost us.”