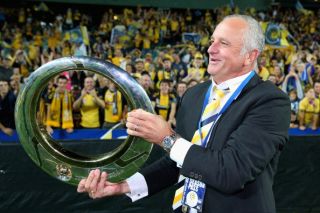 The 50-year-old has been in charge at Bluetongue Stadium since 2010, guiding the club to two grand finals in that time and winning the title last season.

Arnold had been linked with moves to English League One club Sheffield United and Guangzhou R&F of the Chinese Super League in recent months, but the Mariners have managed to tie him down for the foreseeable future, warding off potential interest from elsewhere.

His previous deal had been due to expire at the end of the forthcoming season, but he is now contracted for a further two years.

However, the Mariners remain unlikely to stand in Arnold's way if an offer comes in from outside Australia which he considered too appealing to turn down.

Speaking to Goal Australia regarding his future last week, he said: "My ambition to go overseas hasn't changed. If the opportunity comes to go overseas then I'll be able to go."

The former Australian national team assistant - who served as the Socceroos' caretaker head coach following the departure of Guus Hiddink - reiterated that position in a statement released by the club upon the two parties agreeing terms.

"At some point I do want to test myself abroad and implement what I have learnt throughout my coaching career at the highest level possible," he said.

For now, though, the challenge will be to oversee a competitive defence of the Mariners' A-League crown after losing several key members of last term's title-winning squad in the off-season.

Central Coast's 2013-14 season kicks off with a re-match of the grand final at home to Western Sydney Wanderers on October 12.