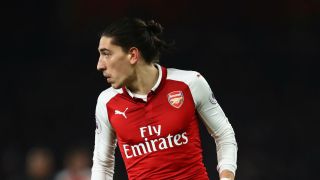 Chelsea failed to move back into second place in the Premier League after they were held to a 2-2 draw by Arsenal on Wednesday thanks to Hector Bellerin's stoppage-time strike.

Eden Hazard's penalty cancelled out Jack Wilshere's opener before Marcos Alonso looked to have sealed the turnaround for the champions, only for Bellerin to blast home at the death.

The result means Antonio Conte's side stay third in the table, a point behind Manchester United and 16 adrift of runaway leaders Manchester City, having won just once in their last five away league matches.

It was Wilshere who broke the deadlock in the 63rd minute with an emphatic finish but Arsenal's lead lasted only four minutes, with Hazard winning and then converting a debatable spot-kick after Bellerin sent him to ground in the box.

Alonso snatched what he thought was the winner six minutes from time, but Arsenal showed great resolve to push for an equaliser and Bellerin atoned in the 92nd minute with a stunning half-volley from the edge of the area.

Chelsea still had another chance to claim all three points, but Alvaro Morata's wasteful finishing reared it's head again and substitute Davide Zappacosta hit the crossbar with his follow-up.

The result will likely cause more frustration for Arsene Wenger, who was hit with an FA charge after complaining about the penalty awarded to West Brom in last Sunday's 1-1 draw at The Hawthorns, though, as it means his side stay sixth in the table, five points adrift of the top four.

16 - Since the start of last season, Marcos Alonso has been directly involved in 16 Premier League goals (12 goals, 4 assists), 4 more than any other defender. Rampant. January 3, 2018

Morata had the best chance of an end-to-end first 15 minutes, the Spain international racing clean through on goal after a mistake from Calum Chambers – part of a three-man defence with Rob Holding and Shkodran Mustafi – only to side-foot well wide of Petr Cech's left-hand post.

Alexis Sanchez was then denied by a quite brilliant save from Thibaut Courtois, who clawed the Chilean's low strike onto the right-hand post and watched it bounce back off the opposite upright before gathering up the ball.

Cesc Fabregas fired over just before the break after being teed up brilliantly by Hazard's backheel, and Cech was called upon to produce a fine double save to deny first Hazard and then Alonso five minutes into the second half.

The match was fast becoming a competition between the two goalkeepers for who could make the best save, with Courtois blocking an Alexandre Lacazette effort superbly after the France striker got free inside the penalty area.

A moment of controversy soon followed when Wilshere, making his sixth league start in a row, went to ground easily under a challenge from Alonso, only for referee Anthony Taylor to decide against issuing what would have been a second yellow card for the midfielder.

And Chelsea frustrations were compounded in the 63rd minute, when Wilshere latched onto a loose ball in the penalty area and rifled a shot in off the top of the left-hand post for his first league goal since May 2015.

Lacazette came close moments later as Arsenal looked to push their advantage, but the Chelsea sucker-punch came quickly. Bellerin swung a boot to clear the ball and caught the bottom of Hazard's foot, giving the Belgium star the chance to stroke down the centre of Cech's goal from the penalty spot.

4 - Arsenal have conceded a joint-high 4 penalty goals in the Premier League this season (level with Watford and West Ham). Spotted. January 3, 2018

It was an equaliser Chelsea scarcely deserved based on their second-half performance but they could easily have scored another two minutes later, Morata racing in front of Chambers again and blazing over.

Hazard was surprisingly taken off for Willian but it proved a masterstroke by Conte. The Brazilian sprayed a fine pass out to fellow substitute Zappacosta, who beat Ainsley Maitland-Niles on the right and crossed for Alonso to fire low past Cech.

It looked as though the Blues would leave with all three points until Bellerin beat N'Golo Kante to a rebound and lashed the ball across goal and into the left-hand corner of the net, sending the home fans into raptures.

Chelsea were inches from silencing them after the restart, with Morata once more failing to beat Cech in a one-on-one before Zappacosta smashed a shot against the bar, but the spoils had to be shared at the end of a thrilling clash in north London.