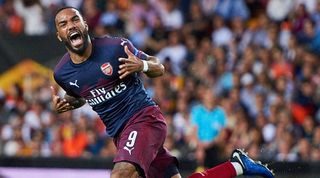 The La Liga champions have been linked with a summer move for the France international as they look to strengthen their strike force.

French broadcaster Telefoot asked the 27-year-old what he made of the rumours and he replied: “It’s flattering.”

Lacazette, who arrived at the Emirates from Lyon in July 2017, scored 13 Premier League goals for the Gunners this term and was named as the club’s player of the season.

Arsenal beat Burnley 3-1 on the final day of the season but ended the campaign one point outside of the Champions League places in fifth place.

However, they have a chance to seal a spot in Europe’s biggest club competition by beating Chelsea in the Europa League final in Baku at the end of the month.