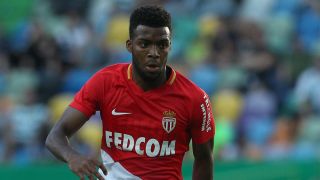 The Gunners have been heavily linked with the 21-year-old during the transfer window, while Premier League rivals Manchester United have also been credited with an interest.

Monaco have already lost Bernardo Silva and Benjamin Mendy to Manchester City and Tiemoue Bakayoko to Chelsea since claiming last season's Ligue 1 title, while speculation persists over the futures of Fabinho and star striker Kylian Mbappe.

And Wenger says Leonardo Jardim's side have made it clear that Lemar will not be among those to leave Stade Louis II in the final week of the window.

"It's dead because Monaco have closed the door definitely, I think," he told a news conference when asked about a potential deal for Lemar.

"They're still on cases like Mbappe and Fabinho. They lost already Mendy, Bernardo Silva and Bakayoko. Monaco is at a stage where they've closed the door. We have the numbers and quality to deal with that."

Arsenal defender Shkodran Mustafi has been linked with a move to Inter and, while he says he does not expect a deal to go through, Wenger conceded that the coming week will be difficult to predict in terms of the transfer market.

"No, I don't expect..." he began when asked about the Mustafi rumours, before continuing: "It's difficult for me to speak about any individual cases because we're now in the final seven days of the transfer market and it's always very difficult to predict, you have to make quick and sharp decisions."

Wenger has only made two additions to his squad in the window, signing Alexandre Lacazette for a reported club-record fee of close to £52million and defender Sead Kolasinac on a free transfer.

However, the 67-year-old says he is happy with the options at his disposal and is more interested in allowing players to leave in order to reduce the size of his squad.

"I am completely happy with the strength of the squad. I have said already we have too many players. Some players have no chance to play," he said.

"If you have too many players of confirmed status you are in a difficult position to give a chance to young players."