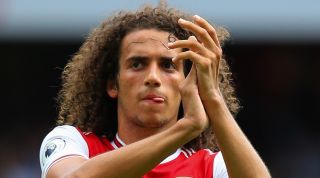 Xhaka was booed off the Emirates pitch on Sunday evening following a frustrating game against Crystal Palace that ended 2-2.

The Arsenal captain's inflammatory reaction then sparked even more of an angry discourse and the situation snowballed out of control.

By removing the Arsenal shirt before storming down the tunnel, Xhaka has potentially endangered his future at the club.

Darren Bent believes it could be the end of the Swiss international's career in North London.

“Once you tell the fans to f-off, take the shirt off and go straight down the tunnel, that’s it at the club," Bent told talkSPORT's Sports Breakfast show.

“I don’t like when fans boo their own players, but when you have that reaction you’re giving in. There’s frustration in there as well because he’s not happy with his own performance, he hasn’t been playing very well.

“But his reaction to the crowd and even to the manager, and to take your shirt off and storm down the tunnel, for me there’s no coming back from that.

Bent believes Xhaka has failed in his role as leader of the Arsenal squad and that the fans will never forgive him for his behaviour.

“What makes it worse is he’s the captain. As captain, you set an example.

"You’re at the forefront at everything. If the team is not playing well you’re going to get criticism first and your team-mates are going to look at you.

“They’ll never forgive him for that.”

When asked who he thinks could be the next Arsenal captain, Bent had a somewhat surprising suggestion.

“The only one name I can think of – and it could come too soon – is [Matteo] Guendouzi. He gives absolutely everything every time he plays.

“Is that too much pressure to heap on a kid who is only 20? Probably a little bit, but at the same time, who else can you pick?

“Xhaka needs to look at Guendouzi who is doing everything he should be doing and is only 20.

“He never throws the towel in.”