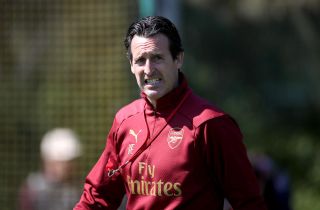 Arsenal have already started their summer recruitment plans and have enough “ammunition” to convince targets to join, according to head of football Raul Sanllehi.

The outcome of the showdown in Baku will determine whether or not the Gunners can offer potential new players Champions League football once again.

As part of a wide-ranging interview with Arsenal Media alongside managing director Vinai Venkatesham, Sanllehi gave an insight into the moves ahead as the club look to build again following the summer departures of Danny Welbeck, Aaron Ramsey and veteran goalkeeper Petr Cech.

“What I can tell you is that we have identified very clearly and unanimously with our head coach and technical people, we know what we want to prioritise and we’re very clear on what our priorities are,” Sanllehi said.

“We’re already in the market and we’re already talking with the people that can help us to cover those positions and I feel quite strong.

“It’s going well and the image that Arsenal has in the football world is very strong.

“Vinai was mentioning we’re a top world club and we are, so we need to go where we belong and that’s the Champions League.

“Many players really want us to be there also when we’re talking with them, but I feel quite strong on the inputs that I’m getting so far.

“I do believe that we have a very good plan to cover those positions to be much stronger next year, to deliver the success that we’re all hoping for.”

Arsenal finished fifth in the Premier League, just a point behind rivals Tottenham, after Emery’s first campaign at the helm.

Getting back into Europe’s elite club competition remains the prime directive, but Sanllehi is confident Arsenal “have a lot to offer to a player”.

He continued: “I don’t feel in disadvantage with anybody. The Premier League, is exciting for any player in the world. London, Arsenal, the history, the dimension of the club, the stadium, the facilities at Colney, the fan base, the followers around the world and the exposure.

“Really, I feel like I have a lot of ammunition when I talk with players to engage them in our project.”

Arsenal head to Azerbaijan’s capital for the match on May 29 without midfielder Henrikh Mkhitaryan.

The captain of the Armenia national team decided not to make the journey because of security concerns around his personal safety despite reassurances from both UEFA and the local football authorities.

The following fan guide has been issued for supporters who are attending the @EuropaLeague final on May 29— Arsenal FC (@Arsenal) May 22, 2019

Writing in a ‘Europa League supporter leaflet’, distributed as a guide for Arsenal and Chelsea fans able to make what will be a 5,000-mile round trip from London, Association of Football Federations of Azerbaijan president Rovnag Abdullayev maintained the Olympic Stadium would host a memorable final.

He said: “Fans will not only experience the highly anticipated game between their favourite clubs, but they will also leave Baku with new impressions about the rich culture, unique harmony, friendly and hospitable people, and the strong spirit of the game in Azerbaijan.

“Goals are certainly the highlights of any football match, but fans are the ones making the atmosphere.

“I welcome all of you travelling to Baku to watch the final and simultaneously be part of this grand football celebration in Baku.”