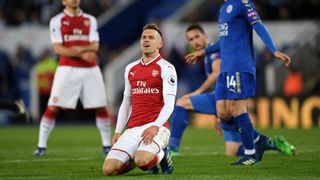 Arsenal have been charged with failing to control their players during Wednesday's 3-1 Premier League defeat at Leicester City, the Football Association (FA) has announced.

The charge relates to how Arsenal reacted to referee Graham Scott after Henrikh Mkhitaryan was adjudged to have brought down Demarai Gray in the penalty area.

"Arsenal have been charged with failing to ensure their players conducted themselves in an orderly fashion," an FA statement read.

"The incident occurred in the 75th minute of Wednesday's game against Leicester City.