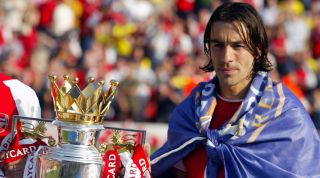 Arsenal are still the only side in English football history to have achieved such a feat, earning them the 'Invincibles' title.

The side managed by Arsene Wenger also went a record 49 games unbeaten, the longest of any side.

But now both records are under threat from this season's Liverpool side under the influence of Jurgen Klopp's coaching.

Pires admits he thinks this Reds side have all the right factors in their favour to win the league unbeaten.

"Yes [they will go ubeaten]! Because they have everything for them: the team, the results, the luck, the coach," Pires told France Football.

"I think there are a lot of people who will agree. Considering how they have been playing for some time, I don't see who could worry them."

The 46-year-old thinks there are similarities between this Liverpool team and the Arsenal side he played in.

"I think we are close enough, fairly similar in terms of players, but not in terms of tactics since we were playing in a traditional 4-4-2 very old fashioned," he said.

"But physically and technically, I find that we are very similar.

"They, like us, have several players capable of making a difference. It is not only one or two but really several. This is the strong point."

"I would have liked to see a duel Virgil van Dijk - Thierry Henry," the Frenchman mused.

"It would have been really interesting. Titi, I know him, he is a real bastard and when you offer him a defender where you are told that he is the best, he will do everything to undermine him."

Despite Liverpool drawing significantly less games than Arsenal had at this stage, and subsequently sitting on a higher points tally, Pires claims it was tougher for the Gunners.

"Today Liverpool has it. They will be champions by being unbeaten, but they are also able to beat our record (49 consecutive games without defeat)," he added.

"People compare, but I find that it was much, much harder in our time.

"Technically, as I said earlier, many teams, especially the big ones, have gone down a notch. And above all, physically, at the time, it sent heavy. There were no cameras, no VAR."