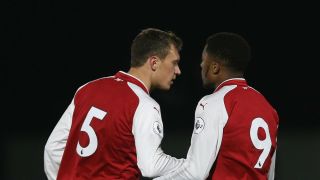 Chuba Akpom, Krystian Bielik and Jeff Reine-Adelaide have all secured loan departures from Arsenal for the rest of the season.

Akpom is the only one of the trio to have made a first-team appearance this season - a three-minute cameo in the FA Cup third-round defeat at Nottingham Forest earlier this month.

The England Under-21 striker has joined Sint-Truiden for the remainder of the campaign, currently sixth in the Belgian Jupiler League.

Reine-Adelaide will spend the remainder of the season with Angers in Ligue 1, while Poland international Bielik has joined League One club Walsall.