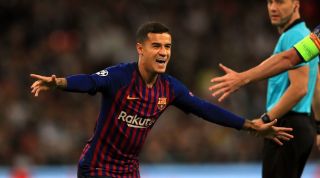 The Gunners and Barça face eachother in a pre-season friendly at the Camp Nou on Sunday for the Joan Gamper trophy.

Club chiefs could use the meeting as an oppurtunity to discuss a loan deal for Coutinho, according to Sport (via the Daily Express).

Raul Sanllehi is believed to be travelling with the squad and will meet Barcelona's hierarchy, some of whom are his ex-collegues.

The link between Sanllehi and Barcelona is thought to be crucial in brokering a deal for the Brazilian.

Coutinho, 27, has been linked with a move away all summer, but it appears no club is willing to pay the hefty fee Barcelona will demand.

Former club Liverpool and rivals Manchester United are both rumoured to be interested in a move for Coutinho.

However, it is Arsenal who may steal a march on their Premier League competitors by undercutting the market and taking Coutinho on loan.

It's understood that Barcelona would demand a sizeable loan fee, and will try to push an option to buy.