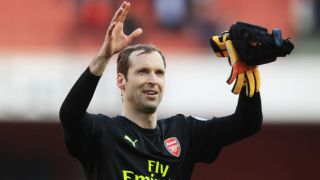 Arsenal goalkeeper Petr Cech does not believe playing in the Europa League next season would be a disaster, though the club still hope to seal a Champions League spot on the Premier League's final day.

Even if the Gunners beat Everton on Sunday, they would need Liverpool to draw against Middlesbrough - or Manchester City to lose at Watford with a goal difference swing of five in their favour - if they are to stand any chance of a top-four finish.

If they do not, finishing fifth will mean Arsenal play in the Europa League for 2017-18, something they have not done for 17 years.

But Cech, who won the Europa League with Chelsea in 2013, feels the competition deserves respect, especially now that it offers the winners a Champions League place.

"Now you can qualify for the Champions League too.

"I have to say it is a fantastic memory for myself to look at the [Europa League] medal. I only played in it once and was fortunate in one go to have won it.

"But obviously I would rather be in the Champions League, that is for sure. Let's see what will happen."

Cech thinks Arsenal would be making a big mistake worrying about the Liverpool or City games rather than focusing on doing the job against Everton, who will finish the season in seventh position.

"We have a difficult game, let's not forget this first," said the 34-year-old.

"We will concentrate on our game and there is only one thing we can do which is to win and then hope the other results will go our way, which if they don't, they don't. But we need to make sure we win our game.

"I never care about the other results so I am not going to start now."