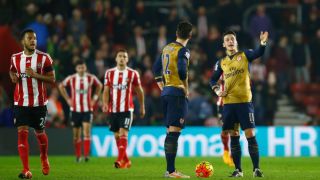 Arsenal will have revenge on their minds as they seek to get their Premier League title challenge back on track against Southampton at the Emirates Stadium on Tuesday.

Back-to-back draws against Liverpool and Stoke City, followed by a narrow 1-0 defeat to London rivals Chelsea, has seen Arsene Wenger's side slip three points off leaders Leicester City while Manchester City sit second thanks to superior goal difference over the Gunners.

Wenger's men edged past Burnley 2-1 in the FA Cup fourth round on Saturday as Alexis Sanchez returned to the starting XI after a hamstring problem, and Arsenal will hope the Chilean can replicate that display against traditionally tricky opposition.

Arsenal have beaten Southampton just once in their last five attempts - losing 4-0 on the south coast in December - although Sanchez has scored in both of his appearances against Southampton at the Emirates.

Tomas Rosicky and Francis Coquelin returned from respective knee injuries at the weekend, while Wenger was suitably impressed by January signing Mohamed Elneny's full debut after joining from Basel.

The Egyptian has yet to feature in the Premier League and Wenger told Arsenal's official website: "I think he has to adapt to the power side of the game.

"But he has shown interesting ingredients like game intelligence, mobility and technical ability and had some good shots. He will be a very interesting player for us."

Southampton were comfortable victors at St Mary's Stadium in the reverse fixture on Boxing Day but have won just one of their last 21 trips to Arsenal - that coming under Ronald Koeman in the League Cup last season.

December's triumph over Arsenal was the sole win in a run of 10 matches either side of the New Year but successive victories and clean sheets against Watford, West Brom and Manchester United have Koeman's men looking up again.

Matt Targett - who featured in the win over Arsenal at the Emirates - told the club's official website: "The form we're in at the moment, I think we can beat anyone in the division.

"So it's important that we go there with confidence but we need to be wary as Arsenal are such a good team. It would be a massive result if we could go there and get a win or a draw.

"I think it would give us confidence going forward and we can take it from there."

Southampton had the weekend off due to their FA Cup third-round exit and Koeman may have Steven Davis available after shaking off a knock although long-term absentees Florin Gardos (knee) and Jay Rodriguez (foot) remain out.

- Arsene Wenger has come up against Ronald Koeman on 10 occasions as Arsenal manager, winning just two of those matches.
- Charlie Austin has scored in both of his Premier League appearances against Arsenal, although they came in 2-1 defeats.
- Wenger’s side have scored in the last five minutes of each of their last five Premier League home games against Southampton.
- Southampton allowed their opponents just three shots on target in their four Premier League games in January - seven fewer than any other side.
- No side allowed their opponents more shots on target in January than Arsenal. At 24 attempts, the Gunners are level with Sunderland.