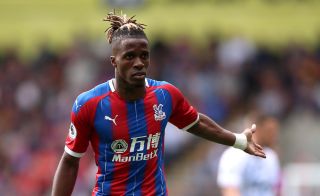 Wilfried Zaha was “not very close at all” to joining Arsenal during the summer, Crystal Palace boss Roy Hodgson has said.

The Gunners reportedly made a bid of £40million for Zaha in July.

There was also summer interest from Everton in the Palace forward, and he is reported to have handed in a transfer request late in the window.

Hodgson’s side are at Arsenal on Sunday, and he was asked at his pre-match press conference how close Zaha was to moving to the Emirates Stadium.

“Not very close at all as far as I know,” Hodgson said.

“I believe that the money that was offered which was widely reported was reasonably accurate, and of course that was way below our valuation.”

The 72-year-old was then asked if he hoped Zaha would go into Sunday’s contest looking to prove a point, given that the way the summer panned out suggested Arsenal – who signed Nicolas Pepe for a fee believed to be worth £72million in August – did not want the Ivory Coast international enough.

“Maybe when they made the offer for Wilf their situation was x, and then possibly things happened during a period of time and their situation changed and maybe more money became available. I have no idea. I can’t speak for Arsenal, for their intentions.

“If you really wanted to know how serious, how anxious they were to sign one of our players, they will have to answer the question.

“But as far as Wilf is concerned, I think he needs to make certain that he gives his very best and shows off his talents every time he plays, because there are lots of teams out there looking for good players, and if he wants to attract one of those clubs, he needs to perform at the very highest level.

“I don’t think the fact it is Arsenal will change his performance enormously – I would hope not, because I’m expecting his performance to be very good against all the teams we play.”

Hodgson also said of managing Zaha so far this season: “I thought he got over his disappointment very, very quickly and he has been good in both training and matches.”

Palace are currently sixth in the Premier League, one place and and one point behind Arsenal.

Hodgson was speaking a day after being awarded an honorary doctorate from the University of Greenwich.

He is an alumnus of the university, having graduated from Avery Hill College in 1972 with a Certificate in Education.

Hodgson said on Friday: “It was very good, I’m very pleased. It was a wonderful ceremony – it’s just a pity I couldn’t keep the gown and cap. That was my only regret, having to give them back!”

Hodgson also has an honorary degree from the University of York, has been awarded the Freedom of the Borough of Croydon, and in 2012 was honoured with a knighthood by Finland.

And he said: “I have done pretty well over the years. My study is actually looking quite good when it comes to those things!”