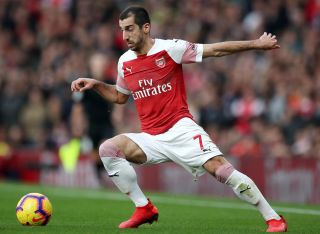 Arsenal admit they are “hugely concerned” about playmaker Henrikh Mkhitaryan potentially missing the Europa League final against Chelsea because of the continuing tensions between Armenia and Azerbaijan.

The Armenia captain skipped the Gunners’ earlier fixture in the competition against Qarabag in Baku because of the issue, which has flared once again with the Azerbaijani capital city set to host the final.

Hostility remains between the neighbouring countries over the disputed Nagorno Karabakh region, where a ceasefire was declared in 1994 after fighting erupted several years earlier.

Those issues meant Mkhitaryan did not travel with Borussia Dortmund to a Europa League game against Gabala in October 2015, and Arsenal say they need assurances over their player’s welfare before naming him in the squad for their upcoming fixture against the Blues.

The club said in a statement: “The safety and security of our players is of paramount importance.

“We are seeking guarantees from UEFA that it will be safe for Henrikh Mkhitaryan to travel to Baku for the Europa League Final, which both Arsenal and Micki require for him to be included within our squad.

“Acceptable guarantees have not been received yet, and we hope that UEFA will be able to supply these promptly.

“We are of course hugely concerned that the location of the final could lead to Micki not being able to play in a European final.”

Press Association Sport has contacted UEFA and is awaiting a response.

Arsenal reached the Europa League final, which will be held on May 29, after a 7-3 aggregate victory over Valencia.