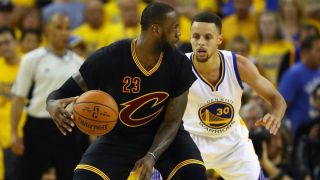 Picking between Cleveland Cavaliers NBA championship winner LeBron James and reigning MVP Stephen Curry is no different to the Lionel Messi and Cristiano Ronaldo debate that so often divides football, according to Arsenal midfielder Francis Coquelin.

France international footballer Coquelin is a basketball fan, having watched the 2016 NBA Finals closely, and he was asked about James and Curry.

James came out on top against two-time reigning MVP Curry after guiding the Cavs to their first NBA title - his third - in June but choosing between the two stars is too difficult, just like it is with Barcelona's Messi and Real Madrid's Ronaldo in LaLiga.

"[Choosing between Steph Curry and LeBron] is a little bit like 'Cristiano or Messi?' in our sport," Coquelin told Arsenal Player.

"There is someone who is naturally gifted and a special talent and the other one’s got talent as well but works really hard.

"I really like Steph Curry but it's two different types of player and I like both of them."

Coquelin made 26 Premier League appearances in 2015-16 as Arsenal finished second behind Leicester City.