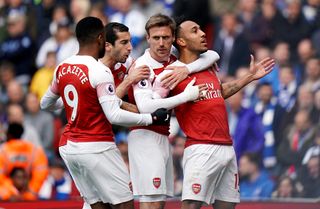 Arsenal’s hopes of a top-four Premier League finish were all-but extinguished as they were held to a 1-1 draw at home to Brighton.

With Tottenham losing on Saturday and Manchester United held at Huddersfield earlier in the day, a win for Unai Emery’s side would have taken them to within a point of Spurs in fourth.

Instead they head into the the final day three points adrift and with an inferior goal difference to their north London rivals after Brighton toasted their survival with a deserved point.

Everything looked to be going Arsenal’s way when Pierre-Emerick Aubameyang scored a disputable eighth-minute penalty – Nacho Monreal going down under seemingly minimal contact.

But Emery’s side, who beat Valencia 3-1 here on Thursday night in the first leg of their Europa League semi-final tie, could not maintain their fast start.

Brighton, whose top-flight safety was confirmed when Cardiff lost at home to Crystal Palace on Saturday, showed more attacking will than in recent weeks and earned a share of the spoils as Glenn Murray also converted from the spot after Granit Xhaka fouled Solly March.

Unlike their shaky start against Valencia, Arsenal were straight out of the blocks and Henrikh Mkhitaryan hit the inside of Mat Ryan’s right-hand post with less than two minutes gone.

They hit the front shortly afterwards with a contentious penalty, referee Anthony Taylor pointing to the spot after he adjudged Alireza Jahanbakhsh to have tripped Monreal.

Aubameyang made no mistake, sending Ryan the wrong way to move onto 20 Premier League goals for the campaign.

True to form for much of the season, Arsenal nearly shot themselves in the foot with a comedy of defensive errors.

Goalkeeper Bernd Leno passed the ball straight to March on the edge of his box and came tearing out to close down as his defence failed to clear on a number of occasions.

The German goalkeeper made amends by keeping out Murray’s header, with March hitting the side-netting moments later.

Ryan had to be at his best to get down low and push out a Shkodran Mustafi diving header from Xhaka’s corner and then turn an Aubameyang strike behind, Mkhitaryan also stinging the Australian’s palms before the interval.

It was Brighton who saw most of the ball at the start of the second half, March testing Leno at his near-post as the visitors went in search of an equaliser.

It came with 61 minutes on the clock, Taylor awarding the Seagulls a penalty after deeming Xhaka had felled March.

Murray tucked away the resulting spot-kick to level up the game with Brighton then sitting deep and frustrating their hosts.

Aubameyang fired a volley wide when he should have re-established the lead as Emery made a triple substitution with Alex Iwobi, Matteo Guendouzi and Sead Kolasinac all introduced for the final 15 minutes.

But it was March who came close to winning it for Brighton, forcing a fine stop from Leno as Pascal Gross could only thrash the rebound wildly off-target.

The performance from the home side saw plenty of their fans head for an early exit, with many of those who remained jeering at full-time despite the post-match lap of honour and farewells for the retiring Petr Cech and Juventus-bound Aaron Ramsey.