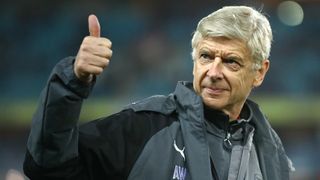 Wenger was a long-time adversary of United until Alex Ferguson's side pulled away in the mid-noughties, and the pair's competitive rivalry is one of the Premier League's all-time greats.

But in recent times, both Wenger's old club Arsenal and their rivals Manchester United have fallen down the pecking order.

And the Frenchman believes that United are still some way off returning to the pinnacle of the game.

"When you see United, they are one of the examples where there’s a potential. But they have not found a collective way," Wenger told beIN SPORTS.

"Maybe these players are not mature enough to carry the play of a team like United, altogether.

"That’s the question mark now. You feel there is something coming out but it’s not ready."

Wenger does not believe the team currently has enough collective know-how like the younger teams of United's past successes.

"When you watch them play, they are not a candidate to fight for the championship.

"Will they emulate what Giggs, Scholes and Beckham did over a number of years? I’m not convinced."