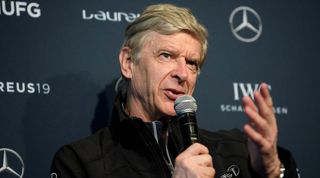 Arsene Wenger has suggested that Manchester United midfielder Paul Pogba is playing like a man whose heart lies elsewhere.

Speaking to beIN Sports, Wenger said: "He behaves like he knows that at the moment Man United is not the team to compete for the championship.

"Plus the fact that he was stopped from going away, it looks like the two together tarnished his performances."

With Manchester United struggling after eight matches this season, two points above the relegation zone, there is huge pressure on their record signing to galvanise the players around him.

However, Wenger also claimed that Pogba's fitness may still be cause for concern:

"I saw him the other night against Arsenal, he doesn't look completely confident physically and he's the kind of player who has huge physical power. He needs to be perfectly fit physically."

Asked about his former managerial rival Mauricio Pochettino, Wenger suggested that the Spurs manager is feeling the weight of expectation at the club:

"When he came to Tottenham he slowly built them up with a very good young generation," said the Frenchman. "But every year people want something more from you.

"I experience that at Arsenal. We were 20 consecutive years in the top four but in the end it wasn't enough.

"For me, when I played them two or three years ago they looked like a young, hungy team," Wenger said of struggling Spurs.

"Today, you don't feel exactly the same chemistry, and a player like [Christian] Eriksen is a bit sidelined because it looks like he doesn't want to commit for the future."

Wenger has hinted recently that he will return to competitive football, although refused to mention any jobs he'd turned down since leaving Arsenal at the end of the 2017/18 season. He also confirmed he was considering a job offer from FIFA.

Quiz! Can you name the players who've scored in a Premier League match between Manchester United and Arsenal?