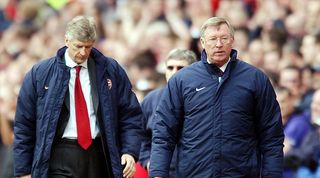 This was more of a one-time spat than a longstanding grudge, but it’s worthy of inclusion for Pardew’s curious choice of insult alone. “Shut your noise, you f***ing old c***,” was the term of endearment employed by the then-Newcastle coach when he and the seemingly inoffensive Manchester City boss Pellegrini clashed at the Etihad Stadium.

There was actually another flashpoint between the pair the following year, when Pardew’s Crystal Palace faced City at Selhurst Park, but he managed to bite his tongue on that occasion.

This dispute between the two former Stoke managers didn’t produce as many headlines as many of the other quarrels documented here, but it was nonetheless very real. The antipathy dated back to 2010, when then-Fulham boss (and specialist in handshake etiquette) Hughes refused to shake Pulis’s paw after a League Cup tie. The latter then returned the favour a few months later, when the Cottagers visited the Britannia Stadium.

The Welshmen renewed hostilities in 2017 when Hughes accused West Brom – the club Pulis was managing – of leaking the details of Saido Berahino’s failed drugs test after the striker joined the Potters from the Baggies.

Ferguson and Dalglish were born just a few miles apart in Glasgow, and both men went on to be associated with a major club in the north-west of England. The two Scots therefore have plenty in common, but their competitive nature meant rivalry was inevitable during their managerial careers.

Manchester United manager Ferguson locked horns with Dalglish when the latter led Blackburn to the title in 1995, while they also clashed during Dalglish’s second spell in charge of Liverpool, particularly after Luis Suarez was found guilty of racially abusing Patrice Evra.

The most memorable jibe actually came from the often-taciturn Dalglish in the pre-Premier League era, when he told the press to speak to his baby daughter Lauren rather than Fergie ("You'll get more sense out of her") after Liverpool and Manchester United had drawn at Anfield. Yet behind the verbal sparring, a lingering respect always seemed to exist between these two old foes.

Wenger and Allardyce were on better terms eventually, but there was a time when the two managers were taking shots at each other every season.

The rivalry was particularly pronounced when Allardyce was in charge of Bolton, whose physical approach regularly unsettled Wenger’s Arsenal. The Frenchman hit out at such tactics – usually after a negative result – while Allardyce was never shy in criticising the Gunners manager’s “arrogance” and supposed influence over referees.

The Premier League’s master of mind games: Ferguson routinely went to war with any manager whose team was challenging Manchester United at the top of the division. The Scot therefore had Benitez in his sights in 2008/09, when Liverpool emerged as strong championship contenders under the Spaniard's guidance.

Ferguson’s suggestion that United’s rivals could be undone by a lack of experience prompted Benitez’s memorable “facts” speech, although the labelling of that incident as a rant belied the Reds manager’s calm demeanour and measured delivery. Yet unlike Ferguson's warm relationship with Gerard Houllier, there seemed a genuine frostiness to all of his dealings with Benitez.

Keegan’s tenure at Newcastle is best remembered for two unfortunate moments: his slumping over the advertising hoardings at Anfield after that 4-3 Liverpool win in 1996, and his infamous “I’ll love it if we beat them” tirade a few weeks later as Newcastle and Manchester United battled it out for the league title.

It shouldn’t be forgotten that the future England boss did a fine job at St James’ Park, even if his side were ultimately unable to win the title ahead of Ferguson’s Manchester United in either 1995/96 or 1996/97. The Scot successfully got under the skin of his Newcastle counterpart towards the end of the former campaign, prompting Keegan’s spectacular outburst on live television by arguing, among other things, that opponents routinely tried harder against the Red Devils.

SEE ALSO Kevin Keegan on Liverpool v Newcastle, 1996: “I still have nightmares about how we threw the title away”

Mourinho was full of praise for Benitez and his Newcastle side when the Magpies beat Manchester United in 2018, but these two traditionally traded insults rather than compliments.

The duo oversaw several tight, tense and tactical encounters during the mid-2000s, when Mourinho was in charge of Chelsea and Benitez at the helm at Liverpool. It didn't help that the two sides were frequently drawn together in the Champions League (where Liverpool tended to win), as well as in the Premier League (where Mourinho's Chelsea were all-conquering).

The best jibe came from the Spaniard in 2007. “We have our special ones here, they are our fans,” Benitez said. “We don't need to give away flags for our fans to wave.”

These two plain don’t like one another. The feud began when Mourinho took exception to what he considered an excessive celebration from Conte during Chelsea’s 4-0 victory over Manchester United in 2016, criticising the Italian for whipping up the Blues support.

Conte brushed off that incident, but the pair locked horns in mid-2017/18 when Mourinho – likely referring to Conte and Liverpool coach Jurgen Klopp – insisted he didn’t need to behave like a “clown” on the touchline to demonstrate his passion.

The Chelsea chief hit back by suggesting that the Portuguese was suffering from senile dementia (later saying he meant amnesia, although the original Italian "demenza senile" seems fairly clear). This prompted Mourinho to insist, out of the blue, that he would never be banned for match-fixing – in reference to a four-month ban Conte served for failing to report an approach earlier in his managerial career. Feisty.

Perhaps the most long-running managerial feud in the Premier League, Mourinho and Wenger’s disdain for one another always extended beyond their respective teams’ on-field battles – and even got physical in one infamous Stamford Bridge touchline scuffle. The Portuguese frequently poured scorn on his Arsenal counterpart’s idealistic outlook, which stood in stark contrast to his own win-at-all-costs pragmatism.

Nine years after calling Wenger a “voyeur”, Mourinho told reporters that the Frenchman was a “specialist in failure” in 2014 after the Arsenal boss had suggested the then-Chelsea honcho was fearful of falling short. If Jose has dropped the more stinging verbal jabs, at least Wenger's touchline shove gave him the upper hand physically.

The Premier League title was won by either Arsenal or Manchester United every year between 1996 and 2004, so it was only natural that the two club’s managers didn’t see eye to eye.

“He's a novice and should keep his opinions to Japanese football,” Ferguson barked when Wenger, after the Frenchman (formerly of Nagoya Grampus Eight) suggested that the league schedule had been extended to suit Manchester United. The Gunners boss had his fair share of angry moments too, once snapping: “I will never answer any questions any more about this man.”

Relations thawed towards the end of Ferguson’s time in charge of the Red Devils. While some put that down to the pair mellowing with age, the more likely explanation was that the Scot no longer saw Wenger’s Arsenal as a threat.