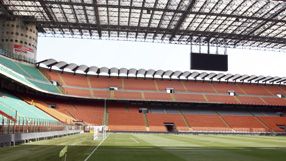 The 80,000-seater arena, shared by Serie A sides AC Milan and Inter Milan, could join fellow Italian top-flight side Cesena in having fake grass if proposals get the go ahead.

"We are very favourable to the idea, especially as we have just had to lay down new turf this week," Milan chief executive Adriano Galliani told reporters without giving a timeframe on any change.

The turf gets a pounding from soccer matches at least every weekend during the season while the height of the stands means not enough sunlight and rain comes in.

Inter had considered building a new stadium and Milan had wanted to renovate the San Siro, completed in 1926, but Italy's failed bid for Euro 2016 has put both plans on hold.