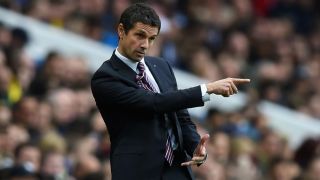 The home side did not offer much of an attacking threat at Villa Park, failing to register a shot on target, but produced a brave defensive display for their new boss to halt a dreadful run of seven consecutive league defeats.

Aleksandar Kolarov hit the post in the first half and Raheem Sterling felt he should have been awarded a penalty after being felled by Ciaran Clark.

Sterling and Kevin De Bruyne missed good chances after the break and Fernando struck the crossbar in injury time on a frustrating Sunday for City, who failed to score for the second away league game running following last month's draw at rivals Manchester United.

Ex-Lyon coach Garde made an immediate mark with six changes to the Villa team, while Manuel Pellegrini had just one alteration to his starting XI as De Bruyne came back in at the expense of Jesus Navas. Fabian Delph and Gael Clichy returned from injuries to claim places on the substitutes' bench.

After a slow start to the game, Kolarov's effort was shovelled onto the post by an unconvincing Brad Guzan save after the left-back had been played in by Sterling. Fernando lashed a good chance way off target after the resulting corner fell into his path.

City suffered a blow midway through the first half when Wilfried Bony was forced off injured, meaning Navas was brought on with De Bruyne moving into a central role in attack.

Sterling was unhappy not to be awarded a penalty by referee Craig Pawson as half-time approached. Yaya Toure sent the England international through on goal and he was clipped by a challenge from Clark as he attempted to cut back on to his right foot, but nothing was given.

Sterling came so close to finding the opener early in the second half. Navas sent in a perfect floated cross and the former Liverpool attacker beat the offside trap, but saw his header from inside the six-yard box kept out by a point-blank Guzan save.

Another chance went begging after Navas showed great pace down the right and flashed a threatening delivery across the face of goal, but De Bruyne could not sort his feet out in time and the close-range chance was gone.

City brought on Delph against his former club and Kelechi Iheanacho in the closing stages and the latter provided the cross that saw Fernando rattle the woodwork with a close-range header in stoppage time as Villa held on for a point.

Pellegrini's side will be knocked off top spot if Arsenal beat Tottenham on Sunday.

- Aston Villa have failed to score in six of their last eight league meetings with Manchester City.

- The hosts kept their first Premier League clean sheet since the opening day of the season and first at home this term.

- City have drawn two of their last three league games 0-0, this after a run of 60 games without a goalless draw.

- Villa failed to register a single shot on target for the first time in a Premier League match since August 2014 (vs Newcastle United).

- The visitors have allowed their opponents just 28 shots on target this season, fewer than any other team in the Premier League.