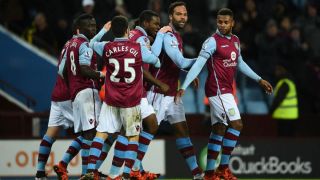 Villa had not tasted success in the Premier League since beating AFC Bournemouth on the opening day of the season, but the league's bottom club held on for a narrow win on Tuesday.

Wilfried Zaha had hit the outside of the post in the opening minute of the game after swapping passes with Jason Puncheon but both teams struggled for a cutting edge in the final third.

And it was an awful mistake from Hennessey that gifted Villa the lead on 58 minutes. Lescott's header had power but was straight at the goalkeeper, who contrived to bundle the ball over the line via his left knee and right ankle.

The win means Villa are eight points from safety at the foot of the table, while Palace remain seventh.

Garde dropped goalkeeper Brad Guzan and handed Mark Bunn his first Premier League start in over two years, while captain Micah Richards was fit only for the bench due to a foot injury.

And it was almost a nightmare start for Bunn as Palace went close after just 42 seconds. Zaha played a one-two with Puncheon that split the Villa defence with ease, but Zaha's shot clipped the outside of the post.

Villa rallied, and Ashley Westwood flashed a drive just wide of the post before Jordan Veretout shot straight at Hennessey from 30 yards.

Bakary Sako scored a late winning goal when Palace beat Villa 2-1 at Selhurst Park in August and he fired a viciously swerving strike just over Bunn's crossbar on 20 minutes.

Jordan Ayew then burst into the box but hit the side netting with his shot, before Damien Delaney's effort from Yohan Cabaye's cross drifted just wide of the post.

Libor Kozak, on his first Premier League start since Boxing Day 2013, almost found the bottom corner with a deflected shot six minutes after the break but Hennessey was equal to the effort.

But the Wales goalkeeper then made a terrible mistake to hand Villa the lead. Lescott firmly headed a corner straight at Hennessey, who got two hands to the ball but somehow let it squirm from his grasp and over the line.

Ayew jinked into the box and fired over with five minutes to go, while the closest Palace came to an equaliser was when Scott Dann's header flew over the crossbar.

Prior to this game, Villa had only kept two clean sheets in the Premier League all season but Palace, who had only lost twice away from home, rarely threatened and Garde's side held firm for a potentially vital victory.